‘When You Cry, It Clears The Soul’, Black Sherif On (Behind The Tweets) With the release of his debut album, ‘The Villain I Never Was’, the Ghanaian superstar Black Sherif  has joined forces with @TwitterGhana to give fans a look behind some of his most notable and memorable Tweets.

The video posted by the social networking company’s Ghana Handle, the ‘Soja’ singer touches on subjects ranging from a love of his hometown, Konongo-Zongo, as well as early confidence about his future success. He talks about his unique musical style and the growth of his sound, which fuses rap with his love of singing. And he gushes about his mother’s pride after seeing him on TV for the first time.

He also speaks to being in touch with his emotional side while elaborating on the story behind this Tweet, which garnered a lot of fan and media attention. In reference to the Tweet, he says, “I believe that when you cry it clears the soul.” 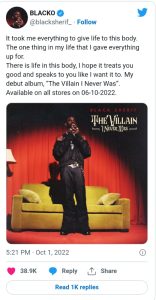 #BehindTheTweets leverages interest around artists and the inspiration behind some of their most popular Tweets, to encourage a deeper connection between fans and their music. It has also become a means by which people on Twitter are introduced to new music and art, and through which they develop a renewed appreciation for artists they already know and love. Black Sherif, whose debut album has racked up massive streaming numbers across all services, is the first Ghanaian musician to be featured on #BehindTheTweets.

The award-winning artist is the latest Ghanaian musical export to make waves on the international music scene, having recorded over 100 million streams on Audiomack alone. His 2022 single, “Kwaku the Traveller”, reached number 1 on the Ghanaian and Nigerian Apple Music charts and was the most Shazamed song worldwide, in August 2022. His music has received much critical acclaim and has been played at high-profile international events, such as the 2022 NBA All-Star game.